Mobility is important for quality of life and is a core indicator of health and function in ageing. Most of older adults experience some kind of mobility impairment, which may affect their ability to move and carry out regular activities. Notably, “wear and tear” of joints during ageing results in discomfort and pain leading to reduced mobility.
There are approximately 400 joints in the human body.
With time, specific joint or rheumatic disorders can lead to painful articulations. The pain caused by such rheumatism is defined as arthralgia.
Arthritis is a rheumatic condition, and the term is used to describe around 200 conditions that affect joints, the tissues that surround the joint and other connective tissue. It is characterized by joint discomfort involving symptoms such as pain, aching, stiffness, swelling, tenderness, inflammation and loss of function of one or more of the joints (generally but not limited to: hand, knee, hip, spine), and can develop gradually or suddenly.
A well-known form of arthritis is osteoarthritis, which causes cartilage to break down. It is a degeneration of joint structures and associated bone abnormalities. 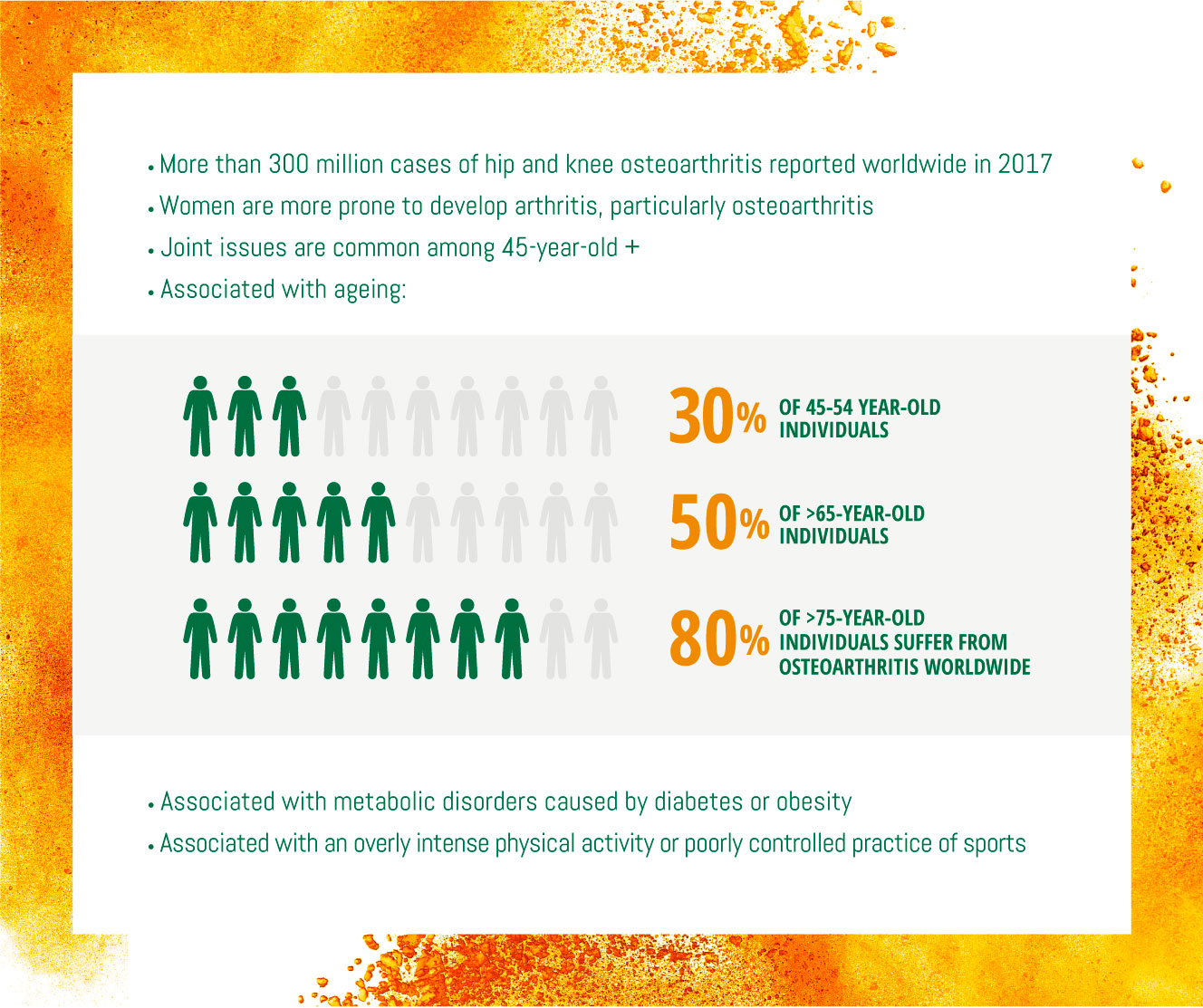 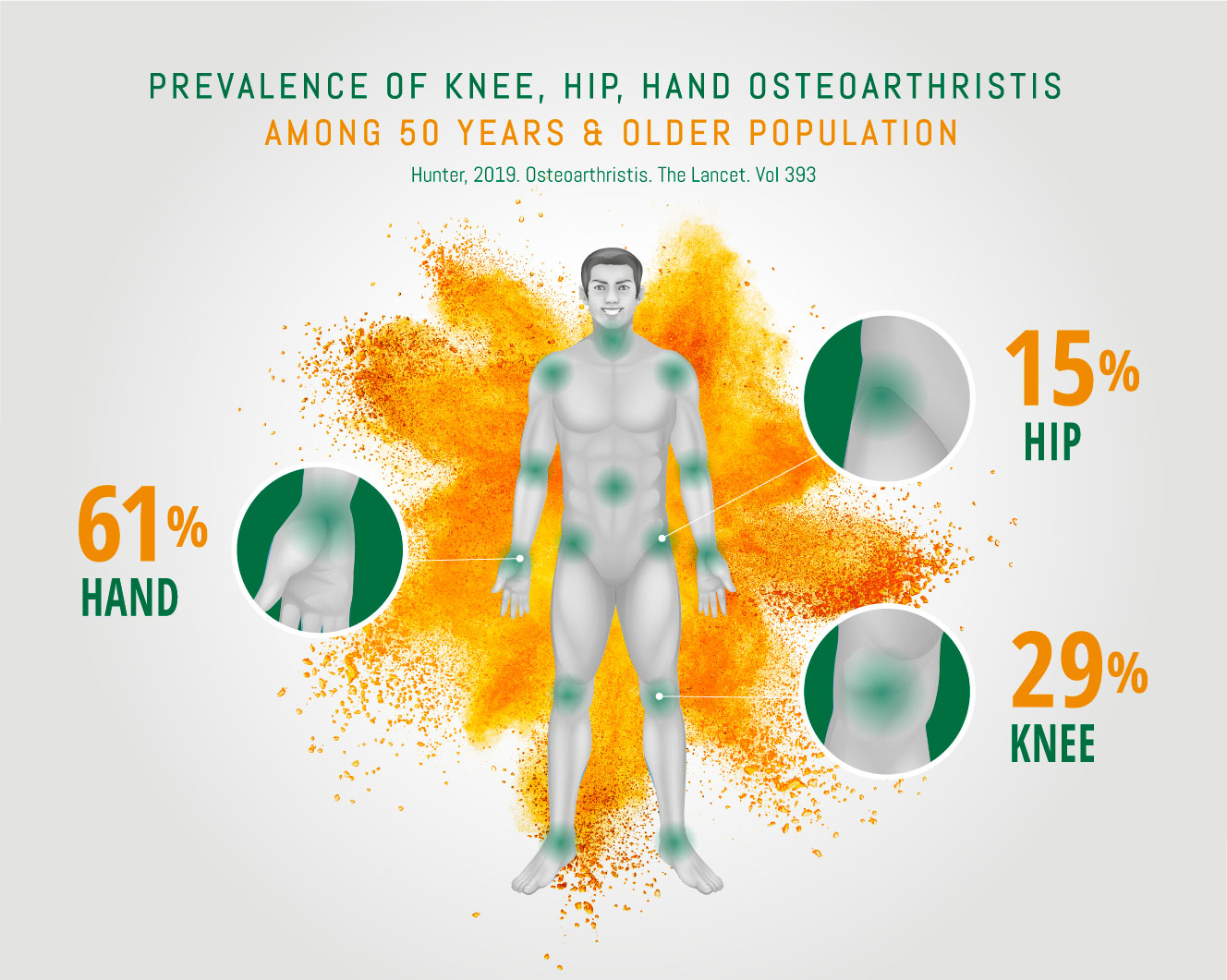 To date, most of the treatments are mainly symptomatic, meaning they are aimed at relieving pain. When cartilage degradation induces inflammatory reactions, reducing the inflammation may help to relieve painful joints.

Standard treatments and their limitations

Anti-inflammatory drugs are not the only option for joint pain. Natural medicines have shown to provide good relief by helping reducing inflammation and aching.
Among other botanical remedies, turmeric has been used in traditional Indian and Chinese medicines for several thousands of years.
As we observe an increasing demand for herbal supplements and natural remedies, turmeric has proved to be an ideal candidate as an alternative health solution with functional and active properties, limiting potential side effects.
Because of its anti-inflammatory and antioxidant properties, turmeric is a widely used ingredient in many medical and food applications. In addition, because of diet and health concerns due to the incorporation of animal-based ingredients (chondroitin, glucosamine, collagen) and chemical ingredients (drugs) respectively, consumers tend to use organic vegan herbal solutions as they go-to pain relief medicine.

What does science say?

More than 70 clinical studies have documented the effectiveness of turmeric in lessening joint pain, notably during osteoarthritis. The following selection of the published studies using clinical gold standards and state-of-the-art methodology highlights those benefits: 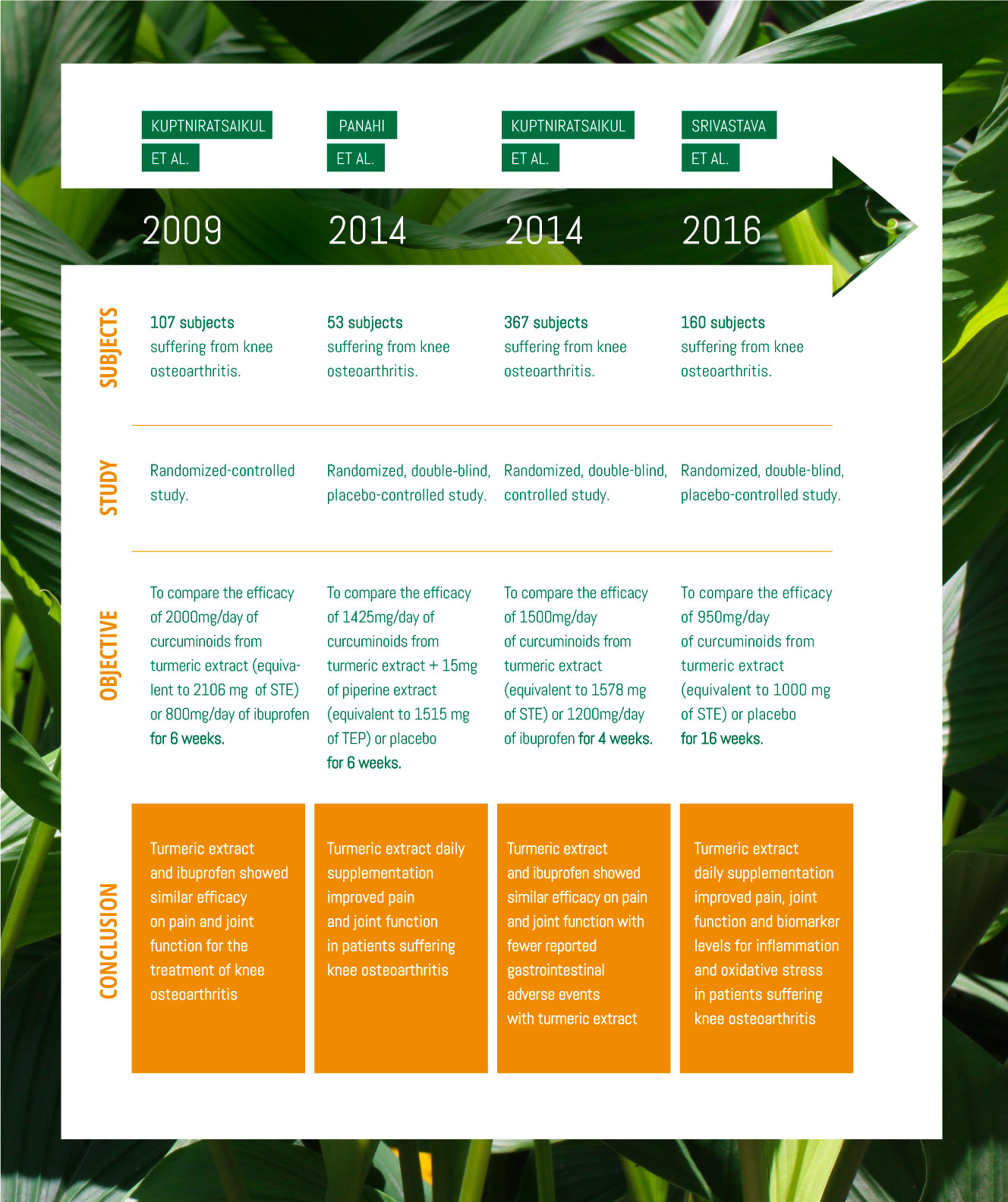 Thus, we strongly believe that a daily intake of a high dose of curcuminoids (min.1000-1500mg) from standard turmeric 95% curcuminoids (STE) or turmeric 95% with added piperine (TEP) could alleviate the symptoms of osteoarthritis and improve joint function in a short period of time.
And because a cost-effective dose of 300mg of TurmiPure Gold delivers as many curcuminoids in blood as 1922mg of STE or 2264 mg of TEP, a single capsule of TurmiPure Gold could provide significant benefits in subjects suffering joint pain and osteoarthritis.

How does it work? Mechanism of action

Pain endured in osteoarthritis is explained by the progressive destruction of the cartilage and the consequent inflammation of the synovial membrane, which further intensifies the pain. Biologically, this mechanism is associated to the release of various substances by the surrounding joint cells, including pro-inflammatory cytokines (interleukins such as TNF-α) and inflammation mediators (such as oxidants and reactive oxygen species), as well as circulating immune cells (such as lymphocytes).

Studies have shown that the curcuminoids in turmeric exert their beneficial effect on inflammation, notably by inhibiting the cascade of signaling pathways induced by NF-κβ activation, which is known to be a key regulator of several genes coding for inflammation proteins. Ultimately, this helps inhibit the production of pro-inflammatory cytokines and subsequently prevent cartilage degradation.

Curcuminoids have been recognized as powerful anti-oxidants. Numerous studies reported that curcuminoid supplementation reduces oxidative stress observed in osteoarthritis, by increasing the levels and activities of antioxidant enzymes and reducing the levels of pro-oxidant factors, and notably reactive oxygen species and free radicals.

This website is intended to provide business-to-business information on TurmiPure Gold®. As it can be accessible from many locations, the information provided might not be applicable, or is not intended to satisfy the requirements of all countries: the information and its uses must be checked for compliance under appropriate local regulations.

Any cookies that may not be particularly necessary for the website to function and is used specifically to collect user personal data via analytics, ads, other embedded contents are termed as non-necessary cookies. It is mandatory to procure user consent prior to running these cookies on your website.