The liver is located in the upper right abdomen, just below the diaphragm and is one of the most important organs in the human body. It accounts for nearly 2% of the body’s mass and plays an important role in individuals overall health. It has over 500 functions, including chemical levels regulation (detoxification), bile production, cholesterol excretion, metabolism of fats, proteins and carbohydrates, and synthesis/storage of key factors.

Among these major roles, the most important of which is to detoxify the blood. The liver, which is closely and constantly connected to the digestive system, receives anything that is ingested, whether it is food, medicine, or toxins (including alcohol). It is in charge of separating the useless and toxic elements in the blood from the nutrients needed by the other organs.

Simultaneously, it stores nutrients before synthesizing them for use by the human body.
Because a failing liver is the source of many disorders, it is critical to assist the liver in its primary roles in order to protect it.

For example, a diet high in sugar and ultra-processed foods is associated with non-alcoholic fatty liver disease (NAFLD). While there are no standard treatments, lifestyle changes can help reverse the disease.

Non-Alcoholic Steato-Hepatitis (NASH ), which is a severe form of NAFLD, is distinct from other fatty liver diseases caused by alcohol misuse or drug side effects because it is highly affected by lifestyle (e.g. chronic excessive calorie consumption, sedentary activity).

Moreover, the liver is the primary site of alcohol metabolism, involving notably the acetaldehyde dehydrogenase enzyme activity (ALDH1, 2 and 3). However, roughly 8% of the world’s population, and around 30-40% of the population in East Asia, have an inactive ALDH gene (especially for the form 2), which inhibits the liver detoxifying capacity. 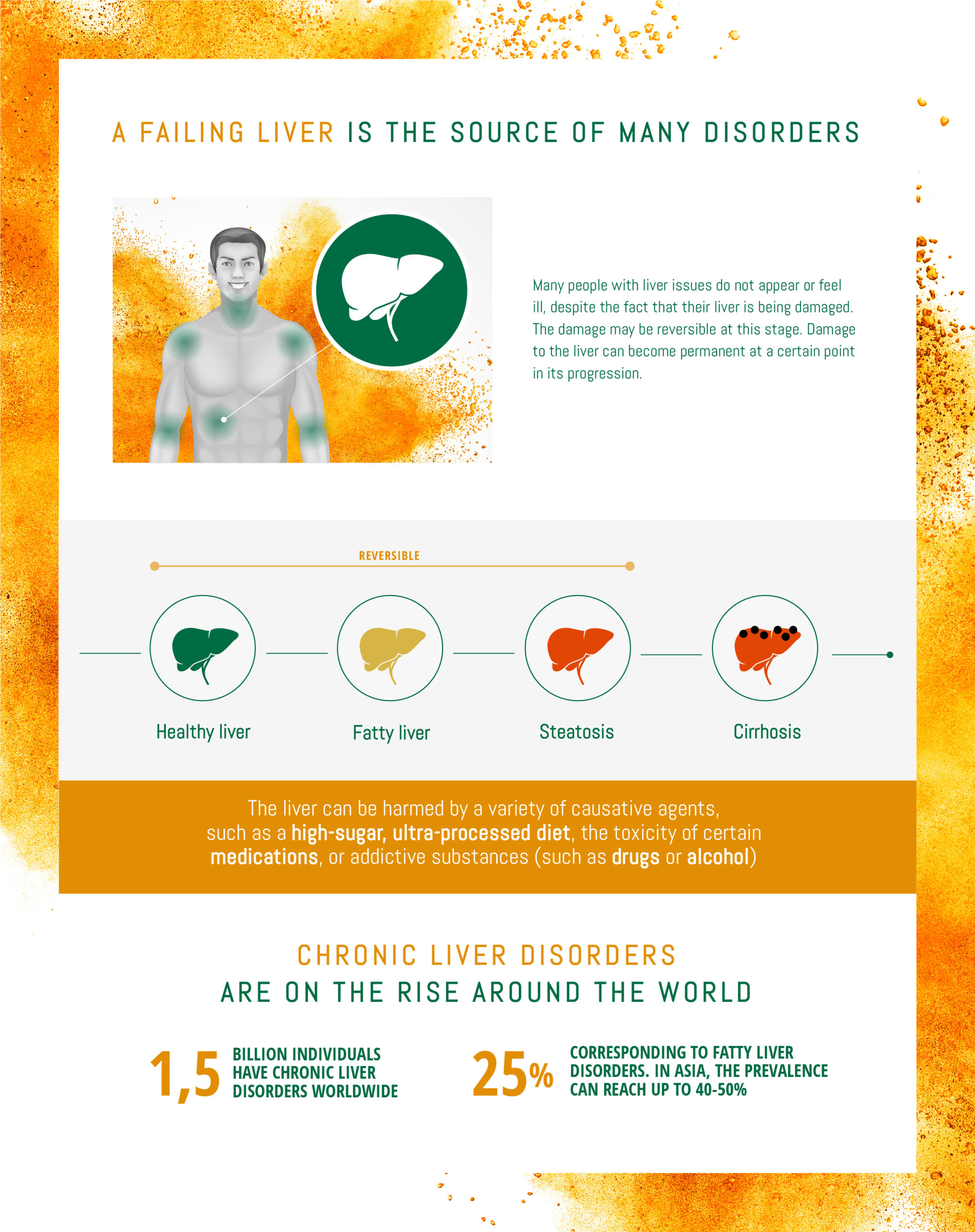 Liver disorders are a fast-growing epidemic

To avoid liver disorders, prevention and healthy behaviors are key.
Today, the most common successful treatment or prevention is hygienic and nutritional adjustments. They include weight loss, avoiding a sedentary lifestyle, a change in diet and physical activity.

This lifestyle shift is critical to help preserve our liver capital.

Alternative medicine has recently gained popularity as a potential approach to liver health management. Herbal remedies from traditional eastern medicine, particularly in India and China, are gaining popularity in the Western world.

Curcuminoids from turmeric are now regarded as one of the nutrition industry’s emerging stars for supporting liver health, owing to increased awareness and demand for natural herbal extracts and for several reasons, including:

What does science say?

The hepatoprotective properties of turmeric have been demonstrated in numerous studies, suggesting that curcumin exhibits protecting benefits on acute and chronic liver disorders.

While a large number of preclinical findings support the efficacy of curcumin(oids) supplementation as promising for hepatoprotective properties, only a few human clinical studies have been conducted to evaluate the effectiveness of curcuminoids in liver disorders.

Besides numerous studies on alcoholic related diseases, Turmeric extracts have been evaluated in subjects with nonalcoholic fatty liver disease (NAFLD).
In a study conducted in 2016 by Rahmani et al., NAFLD subjects received 500 mg/day capsule (equivalent to 70mg curcuminoids) or placebo for 8 weeks. Their results confirmed the effectiveness of turmeric supplementation, enhancing lipid and glycemic profiles and lowering liver fat content.

In another study with 87 NAFLD subjects receiving 1000mg/day of a PHYT formulation (equivalent to 180-220 mg curcuminoids per day) or placebo for 8 weeks, Panahi et al. reported that short-term supplementation with turmeric improves liver fat and serum lipid, uric acid and transaminase levels.

Thus, we strongly believe that a daily intake of curcuminoids, notably from PHYT formulation could help assist and maintain liver function. And because a cost-effective dose of 300mg of Turmipure Gold® delivers as many curcuminoids in blood as 2872mg of PHYT, a single capsule of Turmipure Gold® could potentially provide the same effect.

How does it work? Mechanism of Action

Oxidative stress is thought to be a major cause of liver damage caused by a number of agents, including alcohol, medications, bacterial infections, chemical toxins, and nutritional components.

Curcuminoids have been shown to exert their properties through a variety of cellular and molecular mechanisms, including: suppressing proinflammatory cytokines, lipid peroxidation products, PI3K/Akt activation, and activation of hepatic stellate cells, as well as improving detoxification process and cellular responses to oxidative stress, such as ROS production. 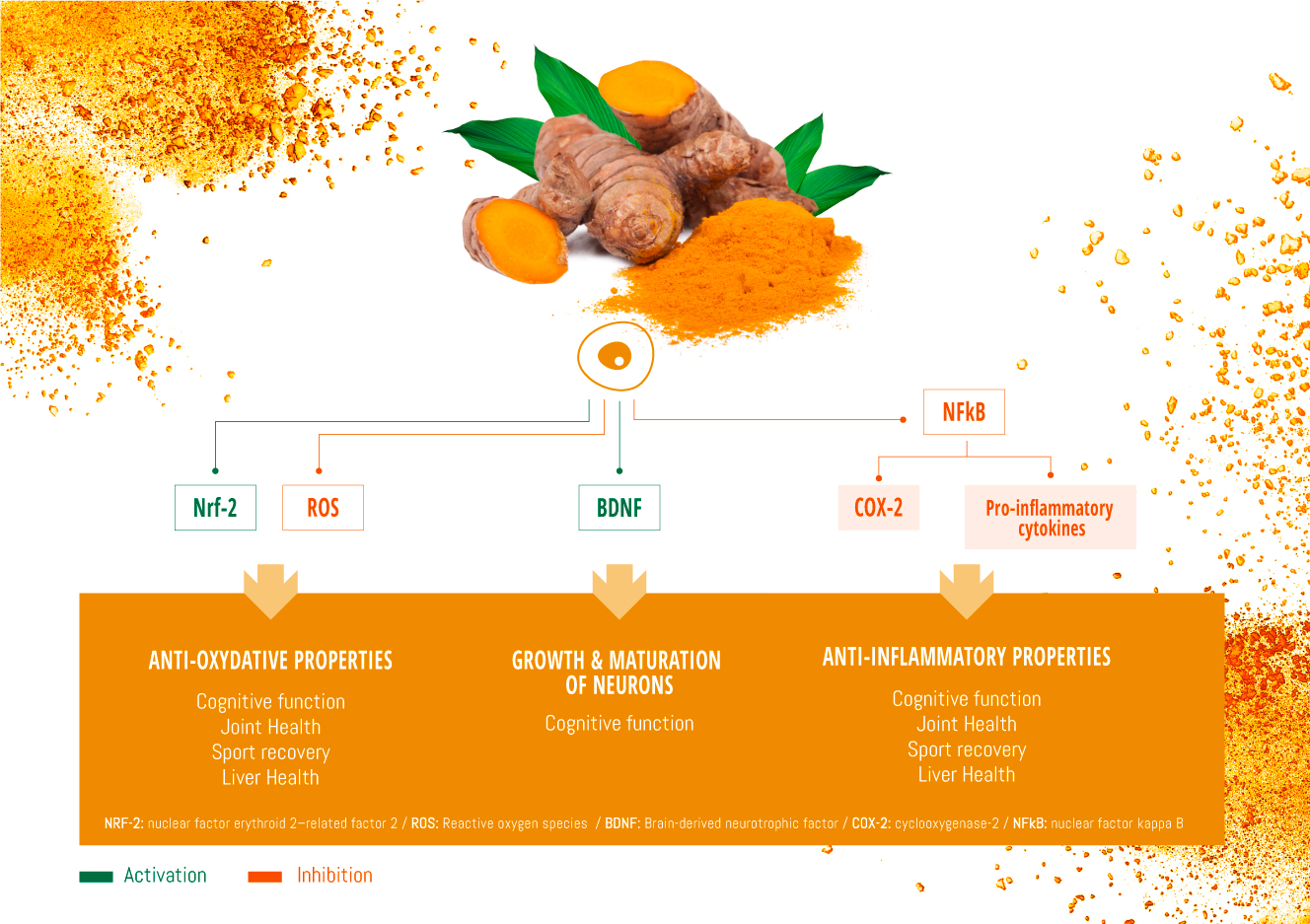 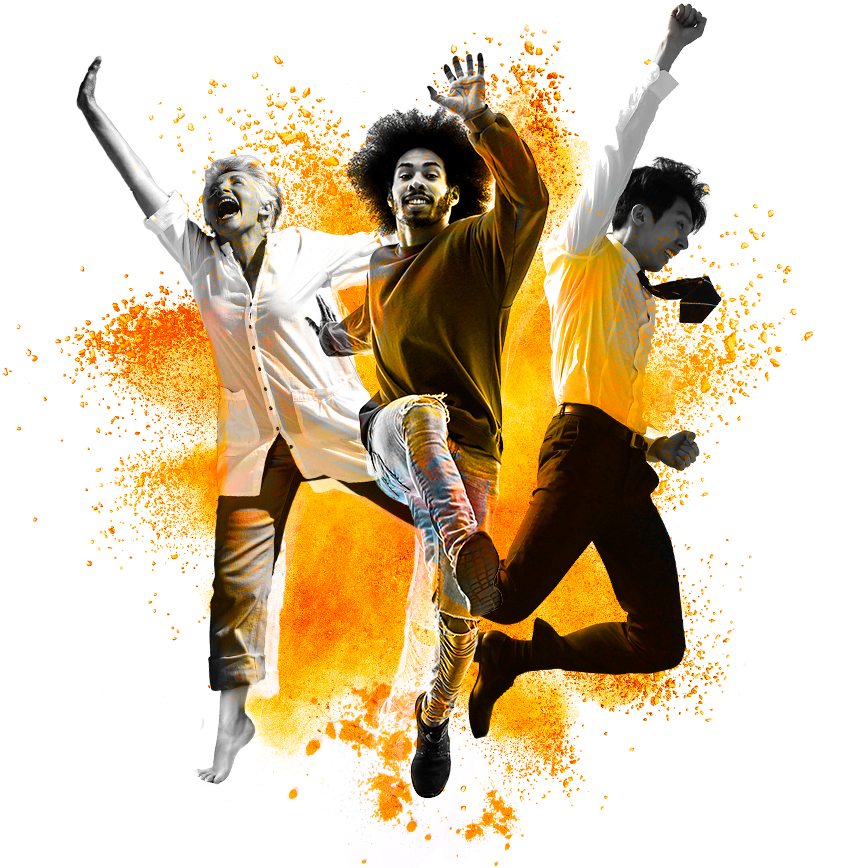 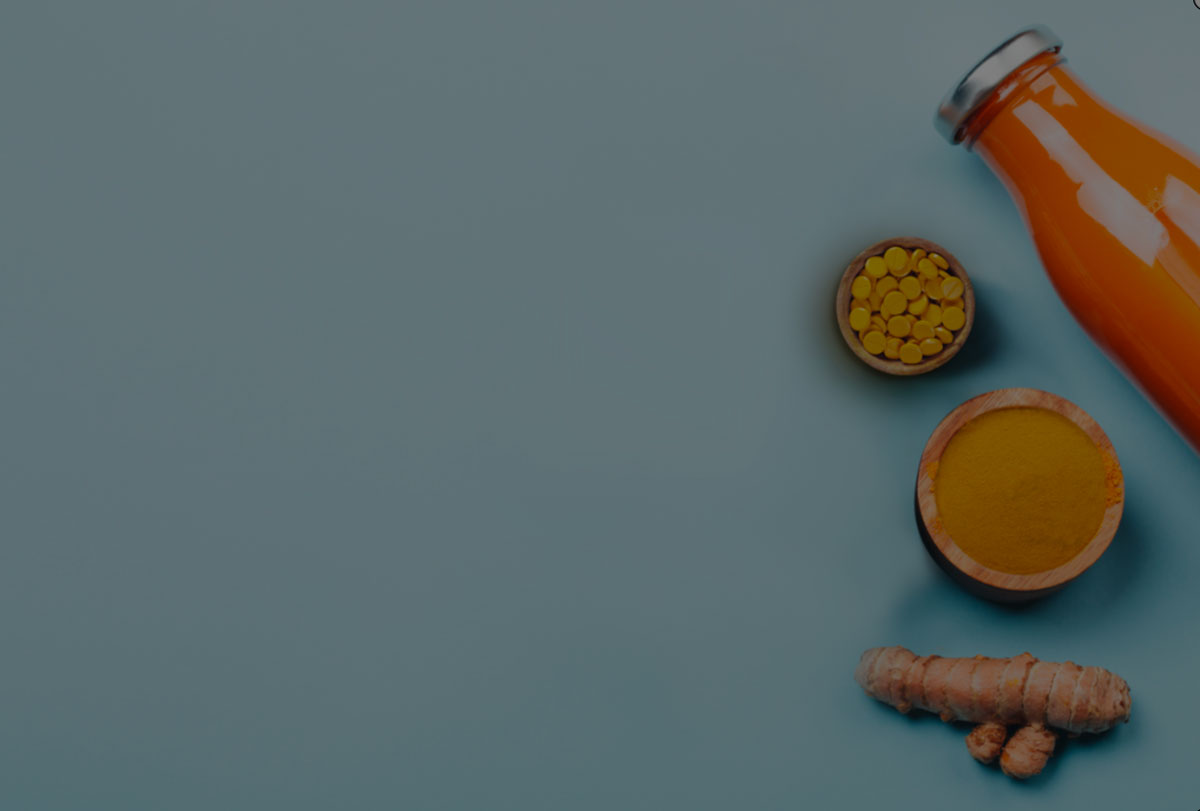 Turmeric for memory and cognition

Turmeric for memory and cognition